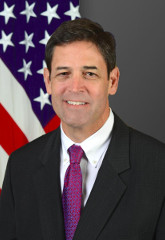 Tom Atkin is Founder and Managing Principal of The Atkin Group, a firm that provides strategic and operational advice to senior government and corporate executives.

Before serving in the Defense Department, Tom was a Director for Raytheon U.S. Business Development for Homeland Security. In this capacity, he was responsible for linking technological, engineering and service solutions to maritime, border, public safety and other security-related requirements in the domestic and international market.
Tom retired from the Coast Guard as a Rear Admiral (Upper Half) in June 2012 after more than 30 years of service in various operational and strategic roles. He has significant government experience, serving in roles at the White House National Security Council, Department of Defense, Department of Homeland Security (DHS), Federal Emergency Management Agency (FEMA), and U.S. Navy.
His senior leadership positions include: Assistant Commandant for Intelligence and Criminal Investigations; Special Assistant to the President and Senior Director for Transborder Security on the National Security Council; Commander of the Coast Guard Deployable Operations Group; and Chief of Staff to the DHS Principal Federal Official for Hurricanes Katrina and Rita. His Pentagon assignments were Chief, Maritime Homeland Security and Defense Policy, Office of the Secretary of Defense; and Chief, Counter-Terrorism Branch, Chief of Naval Operations (Deep Blue).
He is a graduate of the United States Coast Guard Academy with a Bachelor of Science degree in Mathematical Sciences and holds a Master of Science in Management Science from the University of Miami.
The Atkin Group is a consulting firm that provides strategic and operational advice on cyber, intelligence, maritime security, crisis management, incident response, and exercise management. Additionally, The Atkin Group provides mentoring, executive coaching and leadership development training for individuals, teams and organizations.