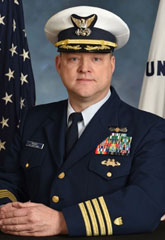 Captain Ryan Rhodes previously oversaw the Capability Deployment and Integration Division in the Office of Shore Forces (CG-741) at Coast Guard Headquarters where he was a Capability Manager and Headquarters Planning Coordinator for the service's largest operational field commands - the Sectors, Activities and Marine Safety Units. His responsibilities also included the program management of the Coast Guard's Command Centers, maritime Interagency Operation Centers, and all policy pertaining to the Shore Force Enterprise.

Prior to his assignment at Coast Guard Headquarters, Captain Rhodes served as the Deputy Sector Commander at Sector Upper Mississippi River. As Deputy Sector Commander, he provided daily oversight for all Coast Guard operations in all or parts of an eleven state area. This included over 2,200 miles of commercially navigable waterways on the Upper Mississippi, Missouri, and Illinois rivers and their tributaries. He led 274 Active Duty, Reserve, and civilian personnel and over 1,300 Auxiliary members. His duties included serving as Alternate Captain of the Port, Search and Rescue Mission Coordinator, Federal Maritime Security Coordinator, Federal On-Scene Coordinator for oil spills and hazardous materials releases, and Acting Officer-in-Charge of Marine Inspection.