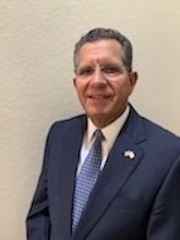 Rear Admiral Rendón has been with Seebald & Associates since 2020, performing maritime facility security assessments, plans, and audits in accordance with the U.S. Coast Guard Maritime Transportation Security Act regulations for the marine industry.

Rear Admiral Rendón has a wealth of maritime knowledge and experience, having completed a 40-year U.S. Coast Guard career, with his last assignment serving as the 41st Superintendent of the U.S. Coast Guard

Academy in New London, Connecticut.  Prior to that assignment, he was Director, Joint Interagency Task Force West (JIATF West), the U.S. Pacific Command's executive agent for planning and conducting counter-transnational organized crime strategy in the Indo-Asia-Pacific.

He is a cutterman with afloat tours as Deck Watch Officer aboard Durable, a 210-foot cutter home-ported in

Rear Admiral Rendón served as Aide de Camp to the 20th Commandant of the Coast Guard.  He also completed a Congressional Fellowship in our nation’s Capital, where he worked for the House of

Representatives, Government Reform Subcommittee on Criminal Justice, Drug Policy and Human Resources, followed by a two-year assignment as Drug Policy Advisor to the Speaker of the House.